Social messaging app Telegram announced today a new update that will allow users to customize messages before they’re sent. Launched in 2013, Telegram works similar to any other social messaging app, with users able to send messages to others, share photos, and make calls. What makes Telegram different from other social messaging applications such as WhatsApp is the seamless sync feature allowing the user to access all the photos and messages they received on a variety of devices immediately. The app is open-source, allowing users to make their own apps with Telegram functionality, and according to the developers, it’s far more secure than its competitors. It also uses a bot API platform which allows developers to create specialized tools for the application.

The founders of Telegram, brothers Nikolai and Pavel Durov, originally founded Russia’s alternative to Facebook, VK. They left in 2014 when the company was taken over, with the brothers alleging that the government forced them out. Telegram is, as a result, somewhat secretive in its public disclosures, including where its offices are located. This is done to shelter Telegram’s teams from unnecessary influence, with one of the brothers reportedly moving from country to country with a small team of computer programmers. This would seem to be a safety precaution after the brothers’ experience in losing control of VK. The company’s headquarters is listed in Dubai. As of January 2021, the app boasted 500 million active users.

Related: Avoid Snapchat’s Astrology Feature If You Want To Keep Your Birthday A Secret 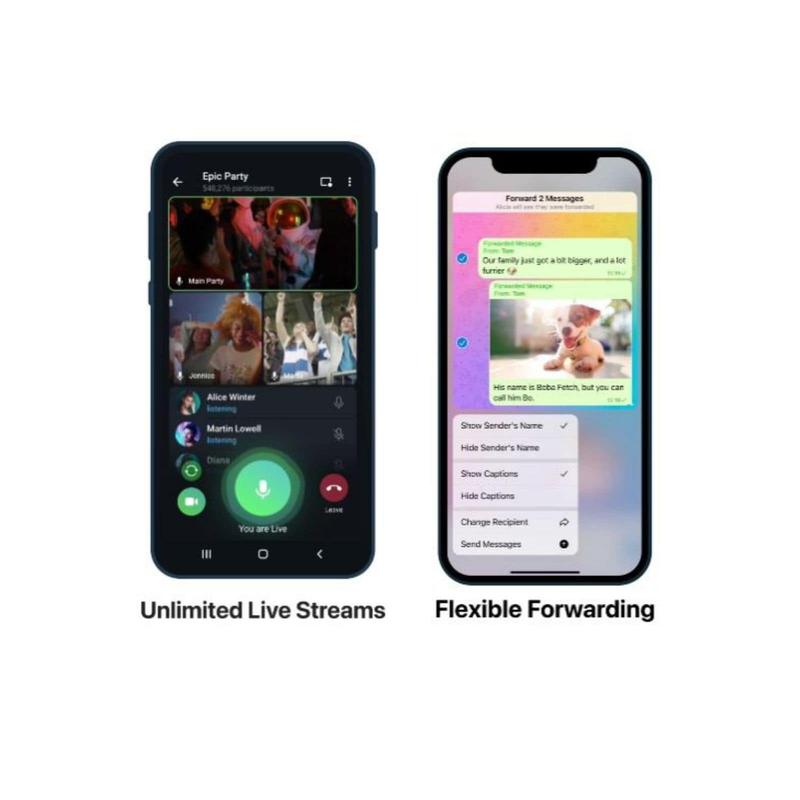 One feature that has Telegram users excited is the ability to edit a forwarded message before sending, something that many users of other social messaging apps have wanted for a while. In order to do this following the latest update, the user needs to highlight the content they wish to forward by holding their thumb on the message in question. After, you can select individual content you wish to forward, then select who you forward to. After this, the user is then given the option to hide the sender’s name, hide the caption of the photo or video, or hide the previous message that would normally be forwarded.

What Else Does The Update Bring

The new update also includes several additions to Telegram. First and foremost is the addition of being able to live stream to other users on Telegram, building off of the addition of group video calls. The app blurs the line between unlimited sociability and streaming with this addition. Users watching a stream may also ‘raise their hand’ and join a live broadcast if the host allows it. Another new addition is the addition of automatic channel jumping. Users can now scroll to the bottom of channels and then skip to the next channel.

Telegram is available on the Apple App Store and on Google Play. The update is already available for Apple users, whereas Android fans will have to download the update via the Telegram website. This is because the Android version of the application is currently still being reviewed by the app store.

Next: WhatsApp Finally Adds A Feature It’s Been Missing Forever

I am a journalist with a love of all things virtual reality. I’m excited to document this emerging technolgy’s progress into the mainstream and how it’ll impact our daily lives.

No comments to show.